Bryony Campion, Lead Gastroenterology Dietitian, has been recognised with a monthly staff award for her work in developing a service for patients with Irritable Bowel Syndrome across East Sussex. She was presented with her award by Non-Executive Director, Sue Bernhauser. 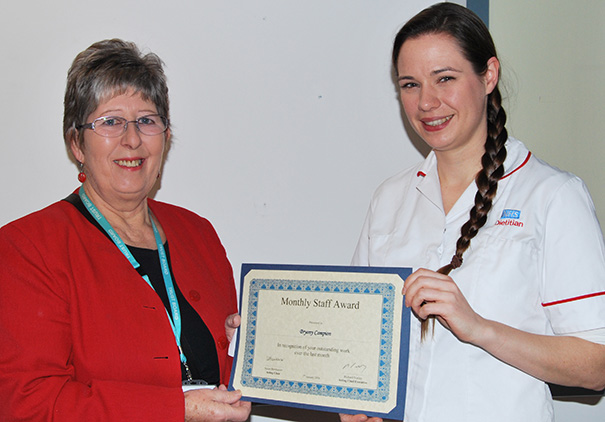 Bryony set up the group education sessions for patients with Irritable Bowel Syndrome rather than seeing patients in the traditional way as a one to one appointment. These sessions were originally set up in Hastings and proved very popular and helpful for patients. As a result, Bryony set up sessions in Eastbourne as well.

Bryony was nominated by Sarah Bushell, Service Lead for Dietetics who said: “Bryony deserves to be recognised for her hard work in setting up these sessions for patients with Irritable Bowel Syndrome. These group education sessions have received great feedback from patients and provide a forum for mutual patient support. Patients get a lot out of speaking and interacting with follow suffers.”

“Very friendly, Bryony is approachable and made everyone at ease”

“It’s a help to listen to other people with similar symptoms as you don’t feel so alone”.

In addition to the positive feedback a number of plaudits have been received including a lovely card from a patient whose quality of life had dramatically improved since meeting Bryony and learning about diet.