Three of our colleagues have been recognised for their humanitarian work by being presented with our monthly staff award.

Staff Nurses Marta Cunha, Marisa Ferreira and Vera Quintes recently travelled to Calais in France, in their own time, to offer first aid to the refugees in the camps near the French town. 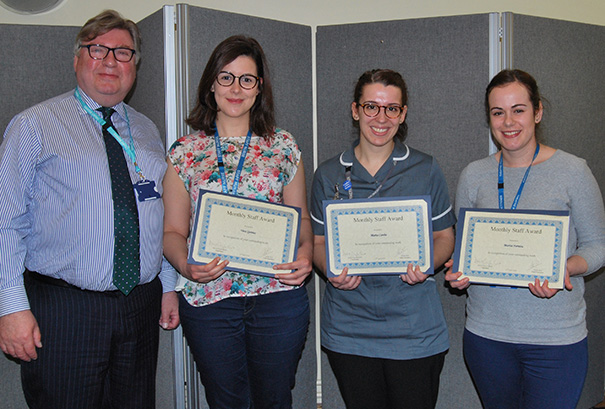 The nurses were nominated for the award by Staff Nurse Lizzie Nugent who said: “Marta, Marissa and Vera spent a week volunteering at the refugee camp in Calais, offering first aid. From the news we have all seen the terrible conditions of the refugees but being there was worse than is portrayed. I believe they are a credit to the Trust for using their own annual leave to work there.”

The nurses were presented with their award by Trust Chairman David Clayton-Smith. He asked them what the camps were really like and Vera Quintes said: “It was a nightmare, the worst we have seen in all our lives. Before we went we had thought about what the conditions would like in the camps. But when we got there we were speechless. No words can describe the conditions of the camps.”

David Clayton-Smith thanked them on behalf of the Trust for their personal generosity in what he described as a “shocking and enriching experience.”