‘Sock it to Sepsis’ has been the message at East Sussex Healthcare NHS Trust with events and information to raise awareness of the condition amongst staff, patients and the public. 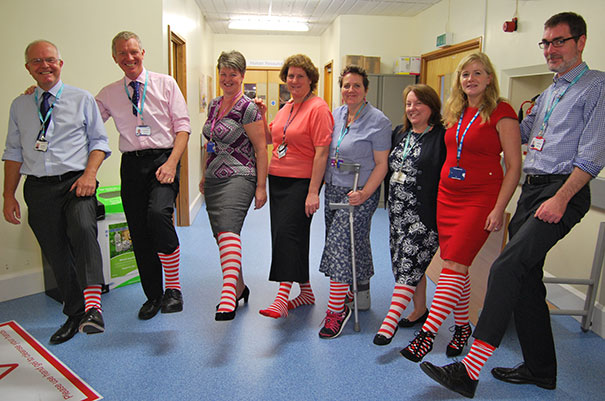 ESHT colleagues show their support for the Sepsis campaign

Previously known as septicaemia or blood poisoning, sepsis is a life threatening condition that arises when the body’s response to an infection injures its own tissues and organs. It can lead to shock, multiple organ failure and death, claiming 44,000 lives in the UK each year (more than breast, bowel and prostate cancer combined).

The early symptoms are often similar to flu which can include a high fever, slurred speech, confusion, extreme shivering or muscle pain, severe breathlessness and skin that is mottled, bluish or very pale.

Whilst sepsis can’t be prevented, evidence shows that recognising the early symptoms and starting treatment quickly can save lives.

A small team of nurses and consultants, wearing the red and white stripey socks associated with the campaign, visited Emergency Departments and all wards at both Conquest Hospital and Eastbourne DGH to raise awareness with colleagues and deliver new guidance for the screening and treatment of sepsis. Information stands were also in the hospitals, giving out leaflets and resources to both staff and the public.

Dr David Walker, Medical Director at East Sussex Healthcare NHS Trust, said: “Whilst sepsis kills thousands of people each year, relatively few people know about the condition and the symptoms. We hope our campaign has increased awareness of sepsis as treatment is often relatively straightforward, it is the early recognition and swift treatment that is key to saving lives.”