As part of the ‘end PJ paralysis’ campaign to highlight the benefits of patients getting dressed as soon as possible when they are in hospital, some staff at the Trust have swapped their uniforms for pyjamas. 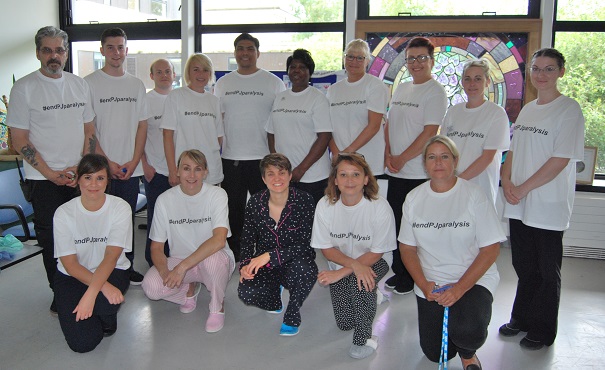 Research shows that patients who stay in their pyjamas or gowns longer than they need are likely to lose mobility, fitness and muscle strength, making it harder for them to regain independence. They also tend to stay in hospital longer. Getting dressed is something we do every day – but for hospital patients it can mean the difference between going home to live independently or with support. 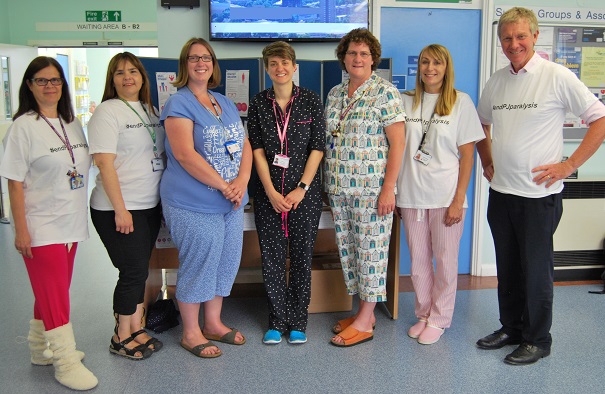 Claudia Hobden Ward Improvement Facilitator said: “The idea behind the End PJ Paralysis campaign is simple. It is about supporting patients in hospital to get up, dressed and moving to prevent deconditioning, which is when patients quickly lose physical function and the ability to do everyday activities. In short people are at their best when they are up and dressed.”

This is important because a person aged over 80 can lose 10 per cent of their muscle mass after just 10 days in a hospital bed. There’s extensive evidence that dressing patients in their own clothes is more dignifying, provides a sense of normality and allows them to be more independent while in hospital.

The campaign #EndPJParalysis started on Twitter and has spread across the UK and internationally. It has now being embraced by East Sussex Healthcare NHS Trust.

Hazel Tonge Deputy Director of Nursing said: “The campaign is about making people aware that older patients can become deconditioned very quickly after a few days in a hospital bed. It can mean the difference between being able to live at home independently and do things for themselves or getting to the point where they can’t manage on their owning and need support.

To promote End PJ Paralysis, the team has had a display and visited wards across the Trust for patients, families and staff to learn why getting up, dressed and moving is so important to recovery. Hospital staff have also had the opportunity to write a pledge saying what they are doing to support this.