A new procedure called an Endobronchial Ultrasound (EBUS) has been introduced at the Trust to speed up lung cancer diagnosis and reduce travel for local patients who previously had to travel to either Brighton or Guy’s Hospital in London, for the procedure. 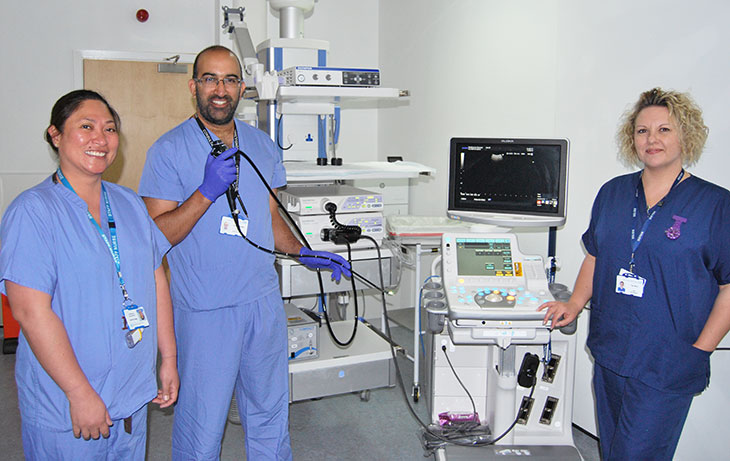 Endobronchial ultrasound is a minimally invasive but highly effective procedure used to diagnose lung cancer, infections, and other diseases causing enlarged lymph nodes in the chest. It offers doctors the opportunity to obtain tissue from the surrounding lymph nodes without conventional surgery. The samples can be used for diagnosing and staging lung cancer, detecting infections, and identifying inflammatory diseases that affect the lungs, such as sarcoidosis or other cancers like lymphoma.

Dr Neel Sharma, Consultant in Respiratory Medicine said: “We are pleased to be able offer local patients this procedure helping to minimise the logistical and psychological challenge for patients needing to travel. Importantly, we are able to get an earlier diagnosis and determine treatment plans for our patients much quicker, helping to reduce the anxiety of waiting for other investigations.”

A local patient who has undergone this procedure said: “The team were so kind and patient while carrying out the procedure.”

Lung cancer is one of the most common cancers and the commonest cause of cancer death in the UK. It also carries the worst outcome of any of the major cancers; less than 10% survive to five years.

Recent advances in lung cancer treatment have had modest success but are frequently limited by delays in diagnosis. These delays mean that the patient’s disease will progress to a state where it is no longer treatable by curative surgery, or the patient has become too unwell to tolerate other treatments such as chemotherapy or radiotherapy. The advent of the cancer pathway has helped to address some of these problems and has also put a focus on rapid diagnosis and early treatment in an attempt to improve patient outcomes.