A Pets as Therapy (PAT) dog Bella and owner Barry Coase, who provide a service to patients at Eastbourne DGH, have won the ‘Inspiration’ award at the More Radio Eastbourne Awards 2017. 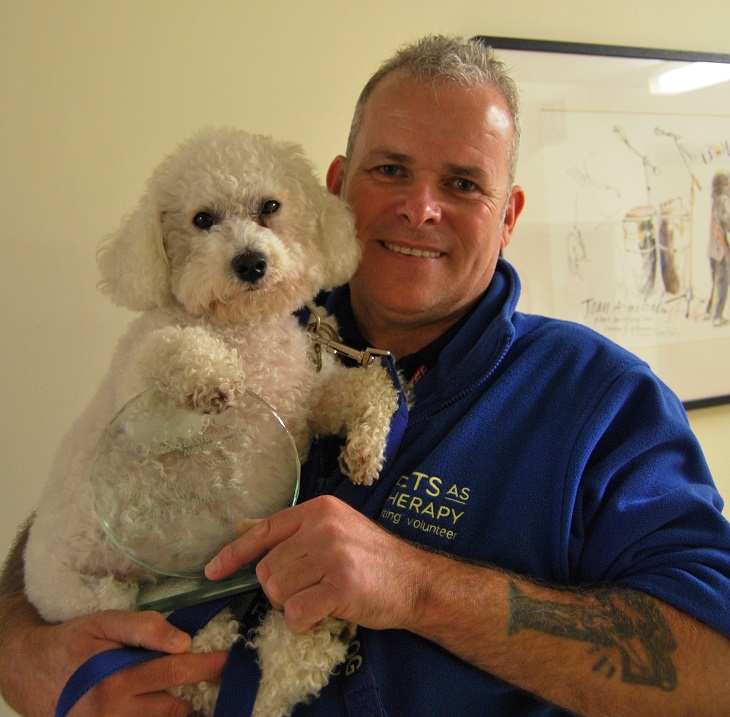 Barry and Bella with their award

Bella, a three-year old Bichon-Frise, has been a huge hit with both patients and staff at Eastbourne DGH since starting her PAT role two years ago.  On her weekly visits with owner Barry Coase, who works part-time as a parking officer on the site, she brings a smile to everyone who comes into contact with her.

Barry Coase said “I was thrilled to have been nominated and feel honoured that we’ve won the award. Bella is a loving little dog who exudes warmth and a love for anyone she comes into contact with. She’s able to adapt to every situation and it’s been a privilege to see the reaction of patients and staff who love her warm and gentle character”.

Bella and Barry were nominated for the award by Kevin Dakin whose sister was admitted to the hospital after having a stroke. On her ward rounds, Bella visits patients across all the departments but is particularly appreciated on the stroke and dementia wards.

Donna Bloodworth, Stroke Unit Matron said: “Research has suggested that introducing a companion animal into the therapy session can result in patients feeling more at ease, more communicative and motivated to engage in therapy. Bella and Barry have touched many people’s lives by coming into the ward.”

Bella was rescued from the Bichon-Frise rescue service when she was only twenty weeks old. Originally very timid, she has developed into a very sociable dog with the perfect qualities for her Pets as Therapy role.