A new playground within a newly refurbished courtyard outside the Kipling Children’s Unit at Conquest Hospital, has been opened by local MP and Home Secretary, the Rt Hon Amber Rudd. 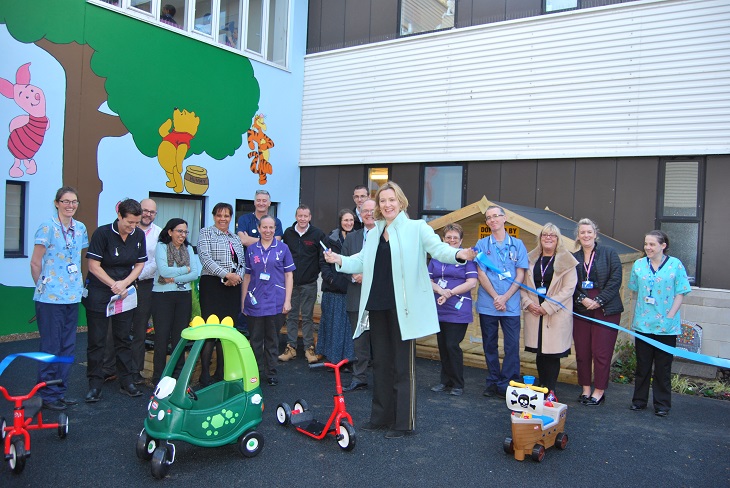 The courtyard has received a substantial facelift following work by local groups and donations, with a large wall mural depicting cartoon characters and the addition of a new children’s play house along with outside play furniture and toys.

The Rt Hon Amber Rudd MP said: “I was delighted to open the Kipling Ward’s courtyard which has become a new play area for child patients at the Hospital. It was amazing to see the changes made possible by generous donors to transform the previously unused courtyard into something special. It was also great to see the work undertaken by our Doctors and Nurses who make such a difference for their patients. I was impressed by the standard of care given to ensure the welfare of the children receiving treatment at this hospital.”

Kipling Ward Matron Nicola Dean said: “We would like to thank Amber for opening our new courtyard which has been totally transformed. This has only been made possible by the kind support and amazing generosity of Darvell Bruderhof, Skinner Sheds, the Connells Tenderheart charity and Parker and Sons. The mural is very eye catching and brightens up our new play area. The play house, toys, benches and trikes will all be enjoyed by many of our young patients.”

The courtyard was refurbished with the grateful support of: