The Trust’s Community Stroke Rehabilitation Team have been at the Eastbourne Arndale Centre, promoting awareness of stroke and stroke prevention and offering shoppers the opportunity to have their blood pressure checked and to test for an irregular heartbeat.

The team were also offering general advice on how to reduce the risk of stroke. Jill Gorman, Lead Community Stroke Specialist Dietitian said: “We took the blood pressures of 50 people on the day and found two, out of every five tested, had a raised blood pressure (defined as >140/90). Some were only mildly raised but 10% were much higher (>160/100). We thought a few had irregular heartbeats but the Kardia monitor showed that only one person actually did, and this was previously undiagnosed. These people were, of course advised on lifestyle changes, and to see their own GP, to get their blood pressure rechecked.” 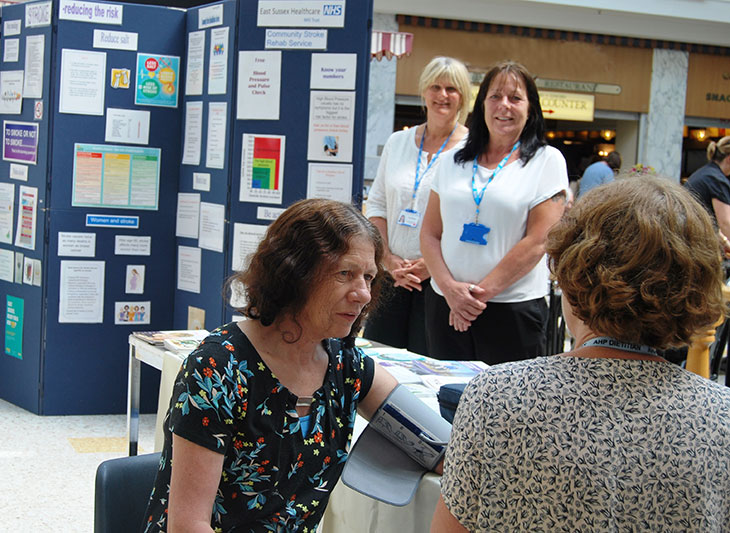 Every year over 150,000 people suffer a stroke in the UK, that is one every 5 minutes and there are over a million stroke survivors. Stroke is the fourth single leading cause of death in the UK after cancer, heart disease and respiratory disease. Almost two thirds of stroke survivors leave hospital with a disability. Stroke causes twice as many deaths a year in women than breast cancer and twice as many deaths a year in men than prostate and testicular cancer combined. Women have more strokes than men, though that is because they generally live longer than men, and the risk of stroke increases as we get older. After age 85, stroke affects many more women than men.

Atrial fibrillation (AF) is a heart condition that causes an irregular and often abnormally fast heart rate. AF is the fourth most important risk factor for stroke. There are 1.2 million people are living with AF in the UK today. The risk of stroke increases 5 times for those with AF. It often goes undiagnosed and it is estimated there could be another half a million people in the UK with undiagnosed AF. Signs that you could have AF are palpitations (being aware of your heart beating fast), breathlessness, dizziness and tiredness. If you experience these symptoms, you should seek advice from your doctor or practice nurse.