The Trust’s Nutrition and Dietetic teams have taken part in the first national Malnutrition Awareness week with displays at Conquest Hospital and Eastbourne DGH, explaining malnutrition; how to identify malnutrition, what the effects are, and what to do if individuals are identified as being malnourished in hospital or the community. 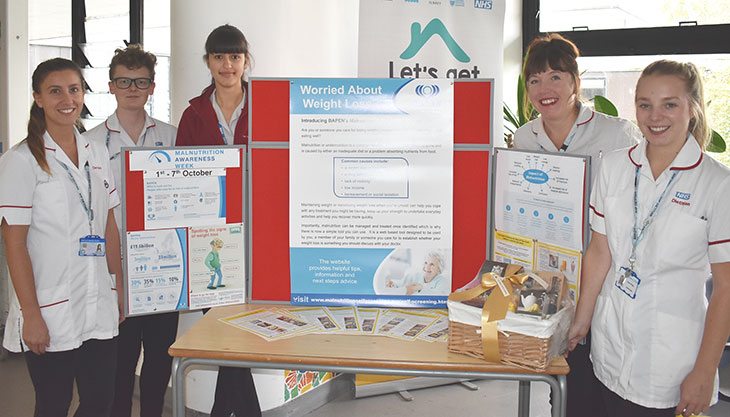 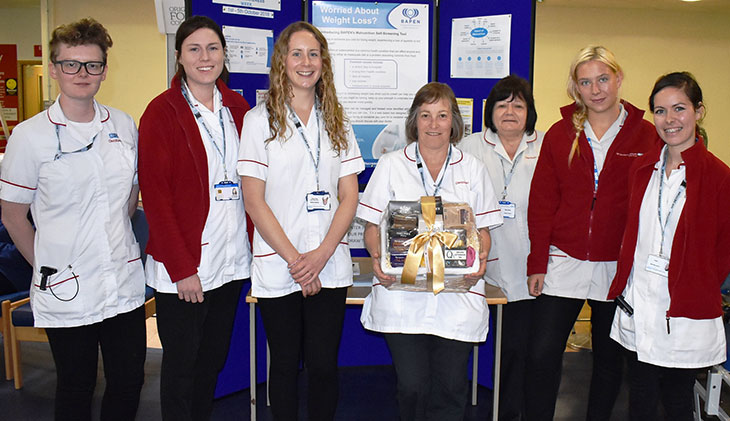 During the week the Nutrition and Dietetic teams encouraged people to undertake the British Association for Parenteral and Enteral Nutrition’s (BAPEN) Malnutrition Self Screening Tool, with an opportunity to win a food hamper kindly donated by Nutricia.

It is estimated that 1 in 10 people over the age of 65 in the UK are malnourished or at risk of malnutrition. The vast majority (over 90%) of people who are malnourished are living in their own homes, and yet for many people the signs and symptoms of malnutrition go unnoticed and unrecognised. Malnutrition affects every system in the body and results in increased vulnerability to illness, increased complications, and in very extreme cases even death. Furthermore, malnutrition is a major public health issue estimated to have cost £19.6 billion in just one year in England alone at the last estimate, about 15% of the total expenditure on health and social care.

Lucinda Silva, Advanced Specialist Dietitian/Team Lead Acute said: “We were keen to promote the first ever national Malnutrition Awareness Week. We wrongly assume that malnutrition and dehydration belong to the past – but the reality is that poor nutrition and hydration are often not recognised by older people, families or health care professionals. The risk of becoming undernourished increases significantly as people age, and it is further complicated by the common myth that losing weight is a normal part of ageing, when it should actually raise alarm bells. We are all well aware that obesity causes serious health problems, but there are also serious health consequences for older people, who are at the other end of the scale, and don’t eat enough. We want to help tackle these common misconceptions, and raise awareness about the importance of eating well in later life.”