Midwife, Gina Moulding, who has worked for the NHS for 51 years, and has supported women and their families throughout their pregnancy journey and was involved in the care and delivery of three generations of some families, with the same enthusiasm and commitment she had at start of her career, has retired.

Throughout Gina’s career as a midwife, predominately spent in Eastbourne, she has delivered approximately 5,000 babies and as a community midwife cared for over 3,000 women. She was recently awarded a Local Business award for her service to the community which underlines her impact on the community as a whole. As well as, receiving a special NHS 70th Award at last year’s Trust’s Awards. 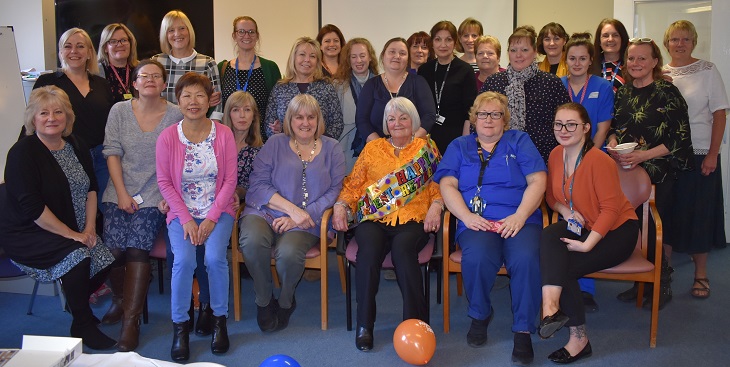 Gina Moulding with the Midwifery team

Longstanding colleague and former student of Gina’s, Jane Bedford-Clarke, Community Midwife Matron said: “Gina has been an amazing colleague and friend to many of us. Her title as ‘the home-birth queen’ is legendary with her colleagues. She has enabled and advocated for women to achieve a safe homebirth often going above and beyond by making herself available even on her days or nights off. Gina has supported families through the loss of a baby and at this devastating time has offered on-going support for bereaved parents including attending funeral services in her own time. This support has been invaluable and remembered by all those whose lives she has touched.

“Gina’s commitment has spanned her whole career and despite her own personal tragedies she has continued to demonstrate this exceptional care. Even when able to retire in 2015 she chose to return to work part-time with the same enthusiasm for delivering high quality midwifery care. She has inspired student midwives and her colleagues to become the midwives they are today. All who have worked alongside her respect and aspire to be like her. Gina goes above and beyond her expected role to support families through the joy or sometimes sadness of pregnancy and birth.”