Six year old Kyan Higgs who has Acute Lymphoblastic Leukaemia has seen what happens when his blood is tested in the laboratory, thanks to the Pathology team at Eastbourne DGH and a charity called Harvey’s Gang. 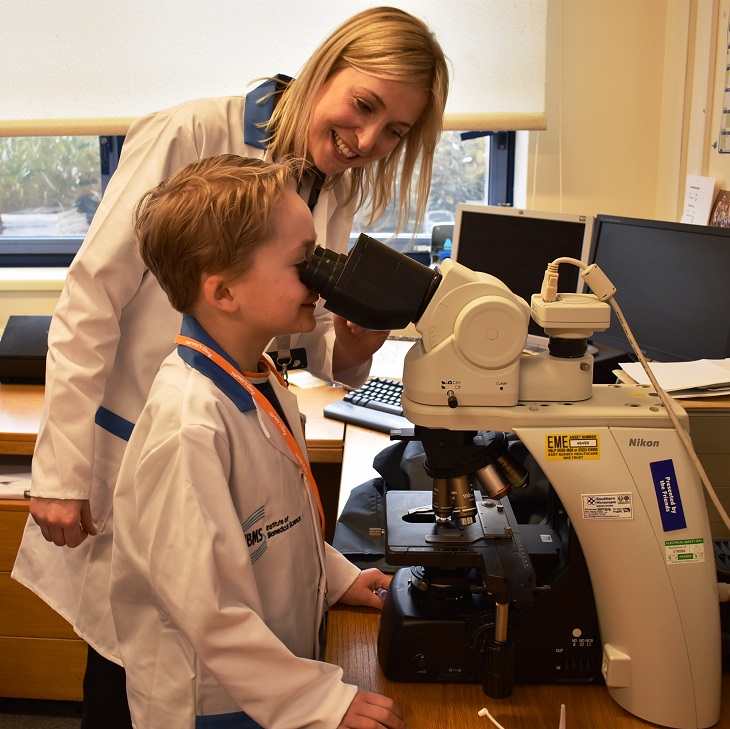 Because of Kyan’s illness he has a lot of blood taken and at a recent appointment, when he came into hospital for a blood test, he also followed the journey of his blood sample through the laboratory.

During his tour of the laboratory he found out how blood is selected for transfusion, he booked in his own blood sample and loaded it onto the analyser. He watched his sample being processed and then saw a Biomedical Scientist make a blood film. Kyan then looked at his blood through a microscope to see a magnified image of his blood and then drew a picture of it. At the end of the visit he received a certificate, a goodie bag and a lab coat to take home, funded by the Institute of Biomedical Scientists.

Kyan’s mum, Lia Higgs said: “Kyan is a very brave boy. He often has to have injections and blood samples taken. So this was a great opportunity for him to put on his own mini lab coat and see what happens. He particularly liked the big lab with the shaking blood machine. It was a great experience for him.”

Claire Barnes, Transfusion Practitioner said: “We were delighted to be able to offer Kyan an opportunity to see for himself what happens to his blood in the laboratory. This initiative is a great way for children to gain a greater understanding of why we take blood samples from them. My thanks to Sally Richardson who has supported me together with Harvey’s Gang and the pathology lab staff involved in making this happen.”

At the end of the tour, Kyan said to his mum: “When I get home I can put my new coat on and tell all my teddy bears about it.”

Harvey’s Gang is a charity which invites youngsters with cancer and other serious illnesses to become trainee biomedical scientists for the day and tour pathology laboratories with their families. It is being rolled out across many hospitals nationally. East Sussex Healthcare NHS Trust in conjunction with Harvey’s Gang is now offering this opportunity to other poorly children.