Samantha Teare, Therapy Assistant and Jane Ferguson, Clinical Ward Orderly have both won an Employee of the Month Award for their ideas and commitment to patients at Rye, Winchelsea and District Memorial Hospital. 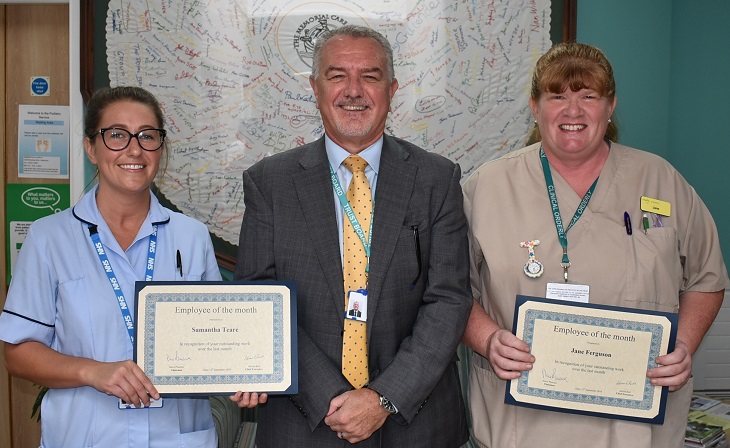 Rachel Chambers, Team Lead Physiotherapist Complex and Vascular Rehab who nominated Samantha said: “Samantha has taken the work currently being done by the Rehab Consultant around increasing patient engagement, motivation and rehab dosage, and really run with it. She has taken the initiative to set up various physiotherapy and occupational therapy groups which encourage patients to not spend all day sat by their bed, but instead to get up and be active, engage with other people currently requiring rehabilitation, and to socialise and keep their mental wellbeing. She has engaged other members of staff in setting up timely activities, including a recent ‘Wimbledon Day’ which was a roaring success, including afternoon cream tea, tennis on the WiiFit and general exercise and enjoyment.

“Inpatient rehabilitation can be a stressful and often lonely time for people. Often patients aren’t near their family and friends, as Rye is in a rural setting, which makes it hard for them to visit. Samantha’s groups have turned around our patients experiences’ keeping their mood positive, enjoying the company of others, even if their own loved ones can’t visit, and therefore engaging more with their functional rehabilitation. The groups happen in a communal area, so all patients have to try to mobilise there, which increases their confidence and often gets them home sooner”

Diane Carter, Clinical Matron who nominated Jane said: “Jane goes above and beyond her clinical ward orderly role and deserves the recognition for it. Jane was made aware of the new mattresses being distributed throughout the Trust. Jane went about sourcing the transportation of the mattresses and the disposal of our old ones. On the day of arrival at Rye, Jane liaised with the nursing staff, removed our old pink foam mattresses from the patient’s beds and placed the new ones in position, securing the help of the driver (the mattress technician). Jane’s excitement was palpable through her exhaustion in being able to secure the new items for the patients comfort.

Samantha and Jane were presented with their awards by Trust Chairman, Steve Phoenix.