Hospital pat dog Bella and her owner Barry Coase have been nominated for a Soldiering on Awards – Animal Partnership Award, and need local people to vote for them. 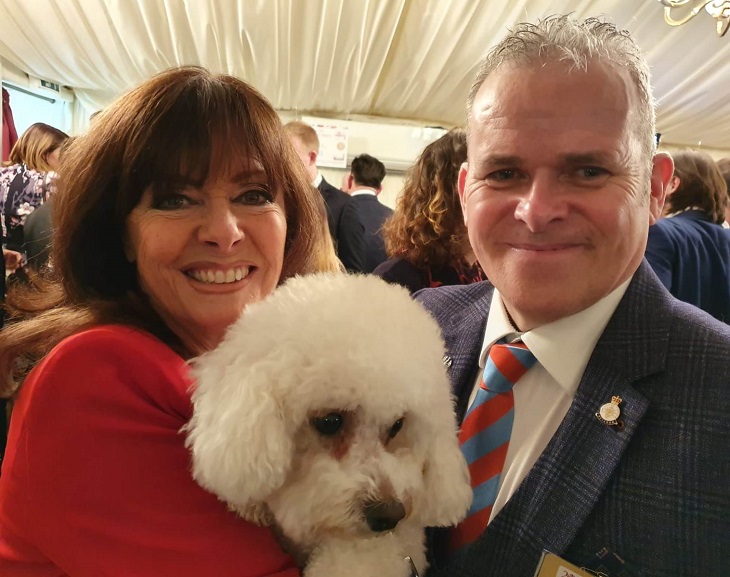 The Soldiering on Awards recognise many truly inspirational people and teams; highlighting the outstanding achievements of current and former service men and women, their families and all those who support the Armed Forces Community.

Barry and Bella recently attended an event at the House of Lords to promote the Soldiering on Awards. Guests at the event included Actor Vicki Michelle from the 1980’s sitcom ‘Allo Allo’, ex-RAF pilot John Nichol, who was shot down in the Iraq War, and Simon Brown a solder injured by an IED in Afghanistan in 2006.

Barry Coase was in the army for 14 years but now works part-time as a parking officer at Eastbourne DGH. In his spare time Barry and Pat dog Bella, a five-year old Bichon-Frise, visit the hospital weekly. They are a hugely popular part of the team at the hospital, bringing a smile to everyone who meets her.

Barry Coase said: “As an ex-serviceman, I am delighted to be nominated for this award. We just need everyone to vote for us now. Bella provides great support to me coping with Post Traumatic Stress Disorder and she is an absolute pleasure to work with her at Eastbourne DGH with the patients and staff.”

Vikki Carruth, ESHT Director of Nursing said: “Bella and Barry make a real different to patients and staff alike. They’ve touched so many people’s lives by visiting patients and staff. It’s great to see the positive effect that Bella’s visits have on patients. Please vote for Barry and Bella.”

Bella was rescued from the Bichon-Frise rescue service when she was only twenty weeks old. Originally very timid, she has developed into a very sociable dog with the perfect qualities for her Pets as Therapy role. Barry and Bella also won the ‘Pets as Therapy Dog of the Year Award’ at Crufts last year.

People can vote for this award through a public vote via – www.soldieringon.org/animal-partnership-award-vote-for-your-favourite