A team of pharmacists from the Trust have won a national diabetes competition held during a campaign to raise awareness of insulin safety. 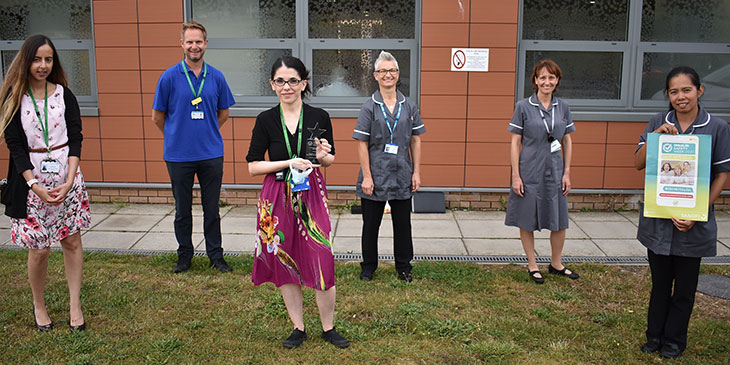 Winning pharmacists with their trophy and their diabetes colleagues

The victorious pharmacy champions were a team of three led by Hannah Syed, Lead Diabetes Pharmacist. They triumphed in the final against a team representing the Betsi Cadwaladr University Health Board based in Wales. The final of the competition was during the national Insulin Safety Week, which helped to raise awareness at a time when people with diabetes are particularly vulnerable to Covid-19.

The seven day Insulin Safety Week campaign saw the Trust’s diabetes team stage a series of events across the Trust to ensure vital information about insulin safety was communicated to staff in an attempt to reduce incidents of insulin errors.

Erwin Castro, ESHT Diabetes Consultant Nurse said: “I and the rest of the diabetes team are delighted by the team’s performance and their participation in insulin safety week this year. Raising awareness about insulin safety is very important.”