Read about our patients’ experiences with our Musculoskeletal (MSK) Therapy Services. 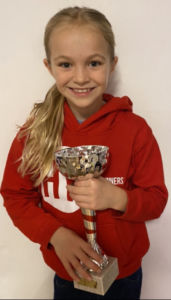 Isabella, 10, a keen and promising runner was diagnosed with Complex Regional Pain Syndrome after suffering a small injury from a fall at the local athletics track. This is Isabella’s story told through the words of her father.

“We would like to thank every professional that had a hand from start to finish in Isabella’s care. Her GP, Mr Willmott for his quick diagnosis and ensuring she got the right treatment, Emily and Anna (the Physiotherapists) for everything in the gym and pool and for showing that positivity will help no end. Without these people being so efficient and caring Isabella wouldn’t be where she is today. Thank you so much”.

On 5 April 2021 Isabella raced in an event called the PB 5km at Ardingly, competing in the mile distance. An official time of 5 minutes 28 seconds placed Isabella in 4th in the under 13 GB list and set an unofficial record at under 11. Exciting times seemed to lay ahead for her.

On 14 April, whilst training, Isabella tripped over a tubular barrier marking the inner boundary of the running track which ended her session and ultimately stood her world on it’s head. What we all assumed was a small injury with a short recovery actually couldn’t have been further from the eventual timescale and severity that she would face.

After complaining of pain Isabella was taken to the Conquest hospital for an x-ray on the 25th April. The images taken showed no apparent injury but she was very uncomfortable and now limping heavily. Now after an appointment with a GP a second x-ray was ordered which took place on 28th April. Again no break or fracture could be found. This time Isabella was put into a protective boot and given crutches as she could no longer weight-bear on two feet as usual.

By this time Isabella was under Consultant care. Her consultant, Mr Willmott, sent her for an MRI scan which was carried out on 12th May. The pain in Isabella’s foot had got so bad she could no longer even put a sock on and to touch the foot triggered intense pain which often left her crying in pain. Again the results of the MRI proved inconclusive. Fortunately Mr Willmott was extremely efficient in assessing Isabella’s symptoms and swiftly diagnosed Complex Regional Pain Syndrome. From here, we as parents did all we could to help Isabella at home via the instructions from Mr Willmott which Isabella really didn’t like due to the pain it caused her.

Up next was Hydrotherapy where we met Emily and Anna. Isabella really gained confidence whilst in the pool under their care and we were very happy because we were all starting to notice very slight improvements when working week by week. After 5 or 6 weeks in the pool a decision was made to move from the pool to the gym due to the improvements Isabella was making. At home we were now trying some simple tasks like standing on both feet or taking a few small steps. This was hard to witness as a parent but something that needed to be done. After a few gym sessions, Anna said she was “very happy” with Isabella’s progress.

Behind the scenes an appointment had been made at Stanmore Hospital in London, prior to the start of Hydrotherapy.

Towards the end of the school year it seemed like Isabella had finally got to grips with her situation and on the 11th July she came out of school using her crutches as walking poles which was quite a surprise. But it didn’t stop there, as the very next day she came out of school saying “take these please I don’t need them anymore”. Quite an emotional moment!

A week later came her appointment at Stanmore. The Doctors there were very happy with the progress Isabella had made and arrangements were made for the physios back in Hastings to continue her rehab. Such was Isabella’s improvement she was discharged from hospital care soon after and cleared to resume normal life and activities dependent on her confidence. Now completely pain free and back living her life as she was prior to the 14 April. Although she is still rebuilding the strength back into her affected leg, she is back training and back to her happy self.

Andrew’s problems first started in 2011. A viral infection and arthritis in his neck led to damage to the nerves and paralysis of his right hemi-diaphragm (breathing muscle) and muscles around his right shoulder blade. By the time this was diagnosed he was very unwell and spent time in intensive care in London. He has had many different medical tests and treatment over the years. The right side of his back spasms causing him significant discomfort, he gets frustrated at the loss of power to his right side and he suffers with sleep deprivation. He also finds his stamina is limited.

“Psychologically more than physiologically it has been a very difficult journey. I often beat myself up for my body letting me down, and pain management has only taken the edge off a 24/7 constant pain. The principle that chronic pain is debilitating cannot be overstated, and the “trendy” and current issue of mental health has never been more evident in my journey. The effect on my family, especially my wife, has been huge and the guilt I have felt over what I put them through on a daily basis adds to this. I lost my job as a senior manager at a large manufacturing company due to my health, so along with some friends, set up a village shop and cafe, which I ran for nearly 8-years.”

Andrew was referred to the Physiotherapy team at Eastbourne Hospital where he saw Highly Specialised Team Lead Physiotherapist Neil. Neil listened to Andrew’s concerns, gave him advice and guided him through a graded exercise programme to help him improve strengthen and control around shoulder and back. Neil helped him to know what to expect and how to pace and progress his activities and exercise.

“Being referred to the team at Eastbourne has made a significant improvement to my story. Realism has been promoted along with efforts to improve my life, more aimed at ways of coping with my “issues”. I am now just starting my second year of teacher training and will be teaching secondary school mathematics this time next year, so I don’t like to sit idle. I have a must win mentality which is at odds with my ability and the limitations caused by my condition. One way I can be positive is to open myself up to this type of review and help in any way possible to make conditions of other people easier to cope with”.

David is 81 and lives with his wife Sheila. He is a retired a wood machinist and made furniture for important buildings including Downing Street and the Cenotaph. He continues to use his skills on jobs around the house. One day he spent a while kneeling to do some electrical work. He struggled to get up and felt sharp pain in his knee. His knee swelled and was painful to put weight on. He couldn’t straighten it so struggled to walk and was in danger of falling. David needed more help from Sheila to be able to manage.

His GP surgery arranged an x-ray and referred David to the Musculoskeletal Triage service. David was called the same day by Amber from the MSK Triage team to make an appointment. Five days later he saw Kate, an Advanced Practitioner at Bexhill Hospital. They discussed what had happened and the problems his knee was causing. Kate examined him, showed him his x-rays and explained what she thought had happened. She gave David advice and exercises and offered him some crutches to help his walking. They discussed options together and David opted for some physiotherapy. Kate also arranged for an MRI scan of his knee.

The following week David saw a physiotherapist, also called David. They set goals together, reviewed his exercises and discussed what to expect. They arranged another appointment and were given a number to call if David needed help sooner. With Sheila’s support David followed the advice and exercise programme and gradually built up his walking. By the next appointment he could straighten his knee, no longer needed pain killers and was back walking to the post box every day. He felt confident he knew how to continue to progress and how to get back in contact if needed.

David had the MRI scan of his knee a few weeks after seeing Kate, the Advanced Practitioner. They discussed the results and his progress on the phone. The scan showed a tear in the cartilage and some Osteoarthritis of the knee cap. Kate explained and reassured David about what to expect. They talked through treatment options again. As David had made such good progress they decided there was no need to change the treatment plan. David was told how he could make contact again if he needed more help with his knee. So far so good as David is back to his normal daily walks and is keeping on top of the jobs around the house.

We want to learn from your experience.

We know that you – our patients – are best placed to comment on the services we provide, and to share thoughts about what works well and areas that could be better.

Can you help us to develop and improve our service?

Join a Patient Forum
We run regular Patient Engagement Forums during which we will invite you to share ideas, reflect on what works and what doesn’t work so well, review our plans and improvement projects for the Musculoskeletal Services.

To find out more about Patient Forums or Telling Your Story: