Janet Garrood, Access and Bookings Co-Ordinator, has celebrated 50 years working in the NHS at Hastings and still plans to carry on working. 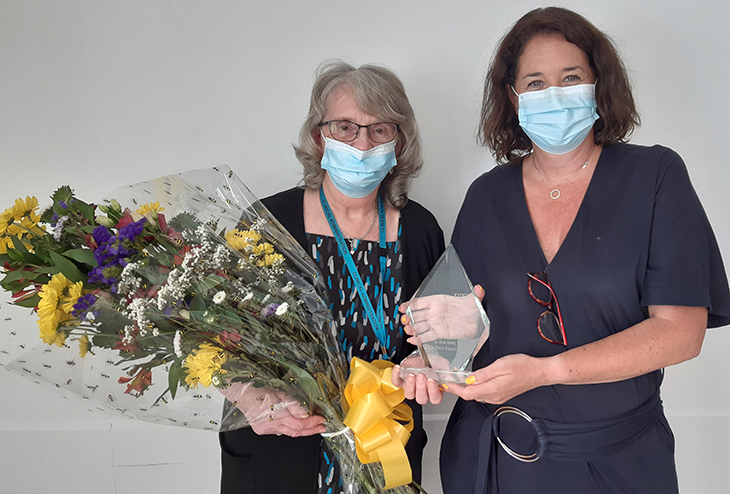 To mark this milestone, Janet was presented with an engraved glass trophy by Trust Chief Executive, Joe Chadwick-Bell.

Janet who has worked over 50 years in the radiology department at hospitals in Hastings started at the Royal East Sussex Hospital, as an office clerk. She then moved up to Conquest Hospital when it opened in 1992. During this 50 years Janet has seen a lot of change.

Janet Garrood, Radiology Administrator said: “I have worked in the X-ray department all my career. I first started at Royal East Sussex Hospital when I was 22 years old. It was the good old days when it was one big family and everyone helped one another. I joined as an office clerk learnt all the office jobs, filing, booking patients in, we had no computers in those days so everything was entered into a big ledger which each month had to be added up.

“I then became an Archive Manager in the film library collating all the X-ray wallets for outpatient clinics until we went digital. When we moved up to Conquest Hospital we had to move all the X-rays up there which was no mean feat. I then took over the Breast work, making mammogram, breast ultrasound and biopsy appointments which I still do now. I very much enjoy working closely with our Breast Consultants, Miss Shah and Mr Subramanian. It’s because I enjoy my work so much that I am still working here.”

Joe Chadwick-Bell, Chief Executive said: “It’s a remarkable achievement to have worked in the NHS and dedicated your life to serving others for 50 years. Janet is an inspiration to us all. Her dedication and loyalty to the NHS, and outstanding work ethic are just fantastic. East Sussex, and the NHS as a whole, is lucky to have staff like Janet, who work so hard to serve their community.”

Michelle Worman, Radiology Pathway Manager said: “It has been a delight working with Janet for the last few years, and I am so thankful for the commitment and support shown to not only myself but to the whole team and department, and we value her insights, experience and the laughter with it.”