Originally situated in Marine Parade Eastbourne between 1888 to 1933 as Leaf Homeopathic Hospital, the hospital moved to St Anne’s Road Eastbourne in 1930s.

It later became known as Leaf Hospital and prior to DGH opening Gynaecology services were based there at until they moved in 1974. The hospital still stands today as part of Brighton University’s Podiatry department and the IMSK podiatry clinic. 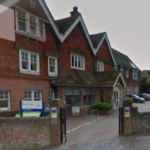 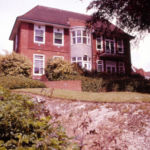