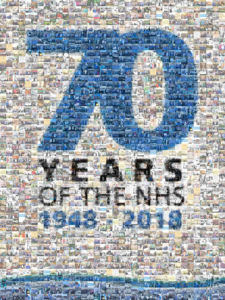 This momentous milestone offers a unique opportunity to celebrate local East Sussex NHS achievements, pay tribute to the NHS staff and volunteers who help shape the service and look to a future vision of the NHS.

In 1948, for the first time, prevention diagnosis and treatment were brought together under one umbrella organisation to create one of the most comprehensive health services in the world. Over the last 70 years, the hard work and skills of NHS staff coupled with medical progress, has continually driven up standards and quality of care for millions. People are now living longer than they did. In 1948 life expectancy was 61 years; in 2018 it is 81 years. Deaths from cancer and heart disease have fallen dramatically and Britain is one of the safest places in the world to give birth.

The NHS in East Sussex

East Sussex Healthcare NHS Trust was created in 2011, integrating hospital and community services. Our Trust now has 6,500 members of staff, working across 80 sites, serving half a million people across East Sussex.

When the NHS was formed on the 5th July 1948, the newly formed ‘Hastings Hospital Management Committee’ took over the running of all of the hospitals and institutions in Hastings and Rother. At the time there were 20 sites with 1,548 beds offering care locally.

There were two separate clinics in Avenue House for VD and Tuberculosis. All Saints Hospital was taken over by the NHS in 1959. Other hospitals outside the Eastbourne area included Hellingly Hospital, Uckfield Cottage Hospital and the Queen Victoria Hospital at Lewes and the Crowborough Memorial Hospital.

During July, ESHT is publishing a special edition of ESHT news, highlighting the history of East Sussex Healthcare NHS Trust and its hospitals. The special 70th birthday edition  includes stories from members of staff and patients who remember working in the local hospitals, or having been treated there, before and after the creation of the NHS.

A pdf of the special edition is available by clicking here